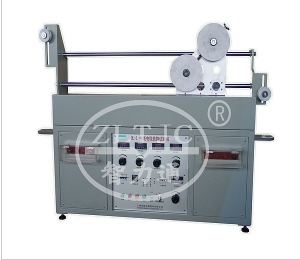 This Tester is checking mechanical strength of completed flexible cables. This test does not apply to flexible cables with cores of nominal cross-sectional area greater than 4㎜2,nor to cables having more than 18 cores laid up in more than two concentric layers. according to IEC60245-2/1998-04 figure 1, IEC60227-2/1997-11 figure 1, IEC60065 /1998-07 Table 11.
This apparatus consists of a carrier C(see IEC60245-2 Figure 1),a driving system for the carrier and four pulleys for each sample of cable to be tested. The carrier C supports two pulleys A and B, which are of the same diameter. The two fixed pulleys, at either end of the apparatus, may be of a different diameter from pulleys A and B, but all four pulleys shall be so arranged that the sample is horizontal between them. The carrier makes cycles (forward and backward movements) over a distance of 1 m at an approximately constant speed of 0.33m/s between each reversal of the direction of movement.
A sample of flexible cable about 5 m long shall be stretched over the pulleys, each end being loaded with a weight. The mass of this weight and the diameter of pulleys A and B are given in following table.

Standard Outfit:
1 carrier, with recirculating-ball bearing bushes running below the table-board on two cylindrical guideways, with mounted traveling boom,
1 geared motor with chain and connecting rod to drive the carrier with a speed 0.33 m/s±5%,
1 set per sample of bolts and nuts for fastening the pulleys,
1 set per sample of restraining clamps and stops to limit the travel of the sample,
1 set per sample of instrument terminals or – after agreement-plugs and socket-outlets for connection of sample,
1 set per sample of clamps to fasten the samples beneath the instrument terminals,
1 set pulleys of diameter 60mm-80mm-120mm-160mm-200mm,
1 set weights from 0.5 kg to 8 kg,
1 electrical switching and control unit with main switch, lockable switch,
1 electrical control system of load current 0~25A, load voltage 0~400V, testing stops when current interruption, short circuit between the wires, short circuit between the sample and the pulley.